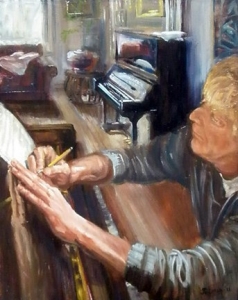 (detail, an oil portrait of my hard-working friend, pianist, composer)

Came across this quote today from one of my favorite musicians, Esperanza Spaulding in Newsweek magazine/Daily Beast:

...She's reading a book called The War of Art- about creative thinking- that is helping her focus. "Artists tend to get so caught up in their image of themselves as an 'artist' " she says, but that's the wrong attitude. The author, Steven Pressfield, argues that creative people instead need to commit themselves to the "everyday, diligent, warrior-like mentality of just 'Get up and do your work,' " Spalding says. "If it's four hours, just get up and do your four hours. I really like that. It's liberating somehow."

It perfectly captures something I've been thinking about lately, the image of artists that non-artists have of the creative process. I call it the "magic wand theory". It derives from the expectation that some workshop students have about how you will transmit creative knowledge to them. That somehow, work plays a secondary role in the creative process to native talent and luck.

I know this is not a unique thought. But, I was reminded again of the persistence of the idea, when listening to the author, Johah Lehrer, talk about "opening up your creativity" and his new book. I haven't read it yet, but from his interviews he seems to be focusing on how to "unblock creativity", and techniques for opening up creative thought.

I guess the demon I face is not how to access creativity, but rather how to remain disciplined; how to establish regular work habits, and stick with them. A painter I know has an almost religious adherence to working from 10-noon daily. When I first met him, I wondered whether he could be serious, given his large body of work. I soon learned that working in fits and starts, with bursts of production interrupting long stretches of non-production (my method) is much less efficient. I am the hare to his tortoise. He is a "creative warrior", putting in the hours that begin to work like compound interest; doubling exponentially as they are accumulated little by little.